Posts feature partner companies & may be sponsored. Post contains affiliate links & I will be compensated if you make a purchase after clicking on links.As an Amazon Associate I earn from qualifying purchases.

I’ve been married for a lot of years.  So many years that I admit that I frequently forget exactly how many.  I often have to look at the embroidered wall sign my sister made for us to remember the exact date we tied the knot.  We’ve been married long enough that taking out the trash is a romantic gesture and I am perfectly happy to get appliances for Christmas.  Nothing says true love like a toaster oven, right?

I have learned, over the years, that marriage is a shit ton of work.  If you think marriage is hearts and flowers and batting your eyelashes at each other and waking up to phenomenal morning sex you are either delusional or still on your honeymoon.  A successful marriage requires you to work your ass off on so many levels it is like an Olympic sport.  So, when I see things in the news like “xwz is ruining my marriage” or “this thing here destroyed my relationship with my husband” I get a little annoyed. You want to place the blame of marriage failure on one thing?  I call bullshit on that.  We need to look at the big picture here…

1.  Yoga pants are not destroying your marriage.  One extremely conservative blogger stopped wearing yoga pants in public because she didn’t want to entice other men to think sexual thoughts about her.  Apparently, this decision was made after her husband admitted that he had trouble not looking at women’s asses in yoga pants. Honestly, who the hell cares where he looks?  You put a cute guy in a speedo in front of me, I can tell you right now I am going to look.  Probably twice.  I may make popcorn and sit down for a good long stare.  Who the hell cares?  You can browse the menu, you just can’t EAT…no matter how delicious the food looks!  Looking at other people in a sexual manner does not destroy marriage.  Having no self control and getting naked with the cutie in the speedo…now THAT ruins marriages.  Don’t blame the sexy, form fitting clothes…blame your crappy decision making skills. 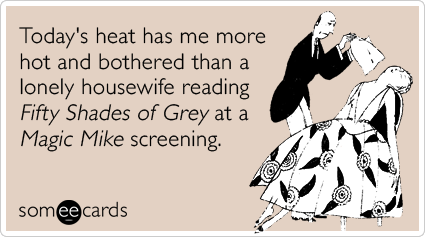 3. Facebook does not ruin marriages. Social media of any sort does not ruin marriages.  If you are looking to social media for your interpersonal relationships then something is lacking in your real life ones.  Don’t blame Facebook when you meet some guy that is your ‘perfect match’ even though he isn’t your spouse.  If you turned off your computer and went and hung out with your ACTUAL spouse, you might find that you have things to talk about.  Sure, that guy online loves to mountain bike and yours doesn’t but maybe YOUR spouse would love to sit in a little cafe with you and drink coffee for a couple hours and people watch.  That mountain biking hottie online probably leaves dirty socks all over the floor and can’t string two intelligent sentences together.  Stop blaming social media for ruining your marriage.  Make your spouse a priority and Facebook holds no power over your relationship at all. The key to any successful marriage is making your spouse a priority.

So, the takeaway from this little lesson?

If you don’t work your ass off at it, you will probably end up divorced or unhappily married for a really long time.

Don’t blame one thing if your marriage doesn’t work.  Look at the overall picture.  Those ‘big picture’ concepts are what is going to save your marriage.  Work at them.  BEFORE the problems start.

You can’t have a good marriage if both people aren’t fully committed to making it work.  It sucks if you happen to be the one willing to work at it and the other person isn’t but since marriage is a two way street you kindof need both people fully on board the project.

If your significant other isn’t on board?  Find a new one.  Or maybe just hang out on Facebook and rent Fifty Shades of Grey by yourself.

We use cookies on our website to give you the most relevant experience by remembering your preferences and repeat visits. By clicking “Accept All”, you consent to the use of ALL the cookies. However, you may visit "Cookie Settings" to provide a controlled consent.
Cookie SettingsAccept All
Manage consent

This website uses cookies to improve your experience while you navigate through the website. Out of these, the cookies that are categorized as necessary are stored on your browser as they are essential for the working of basic functionalities of the website. We also use third-party cookies that help us analyze and understand how you use this website. These cookies will be stored in your browser only with your consent. You also have the option to opt-out of these cookies. But opting out of some of these cookies may affect your browsing experience.
Necessary Always Enabled
Necessary cookies are absolutely essential for the website to function properly. These cookies ensure basic functionalities and security features of the website, anonymously.
Functional
Functional cookies help to perform certain functionalities like sharing the content of the website on social media platforms, collect feedbacks, and other third-party features.
Performance
Performance cookies are used to understand and analyze the key performance indexes of the website which helps in delivering a better user experience for the visitors.
Analytics
Analytical cookies are used to understand how visitors interact with the website. These cookies help provide information on metrics the number of visitors, bounce rate, traffic source, etc.
Advertisement
Advertisement cookies are used to provide visitors with relevant ads and marketing campaigns. These cookies track visitors across websites and collect information to provide customized ads.
Others
Other uncategorized cookies are those that are being analyzed and have not been classified into a category as yet.
SAVE & ACCEPT